Officers get better insight into Access to Information Act

Information officers working in government ministries and other government affiliated bodies are now better prepared to provide the public with information they want from government, after attending a training session to learn more about the Access to Information (ATI) Act.

The half-day workshop organised by the Information Commission was held last Thursday at the Seychelles Trading Centre (STC) conference room.

The workshop was purely to train the information officers on their responsibilities under the Access to Information (ATI) Act so that they understand better what they must do to make information available to the public and how they should go about releasing the requested information.

It was also an opportunity for the Information Commission to get input and feedback from the information officers on a manual being drafted to support the latter in fulfilling their duties.

The Access to Information (ATI) Act which came into law in July 2018, is a ‘powerful’ legislation which allows the public to access any information, with the exception of those being exempted, from any public body.

The purpose of the law is to make the government more transparent and accountable.

The act also carries penalties for delay in providing information or non-compliance from these public bodies.

Dr Lemieux reassured the information officers that they are all covered under the act and cannot be held liable for releasing information in compliance with the act unless they fail to comply with the act, in which case the commission has the power to impose a R25,000 fine.

She noted that through court proceedings, an information officer who deliberately denies access to information could face up to five years in jail and be liable to a fine of R200,000.

Dr Lemieux further said that access to information has become a global norm and is well-established in three quarters of the world, especially in democratic countries.

She further said that ‘information’ that needs to be made accessible to the public include any original or copy of documentary materials irrespective of its physical characteristics, such as records, correspondents, fact, opinion, data, advice, drawing, map, photograph, visual, audio etc.., regardless of the form or medium in which it is held in the possession or under control of the public body.

“You as the information officers on the other hand are responsible for releasing or making open the administration of the government through providing access information from the documents produced on a day to day basis,” Dr Lemieux said, noting that to acclimate to the ATI Act needs a change in the mindset and government culture in the way information is given thus prompting governments to become more open.

Dr Lemieux, who was here in August 2018 as part of the preparation process for the implementation of the ATI Act, said that a lot of progress has been made since.

The Commission Launches its “How To” Manual | More Information Officers Trained 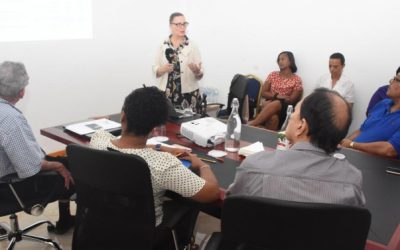 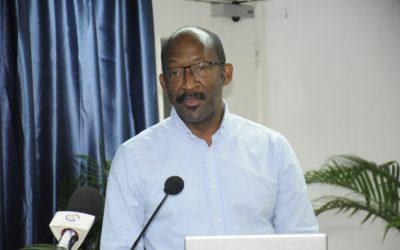 If you have a question or need specific information, please use the contact form or the contact information below and we will get back to you as soon as possible.
Contact Information:
Dina Antoine
Administrative Officer - Information Officer